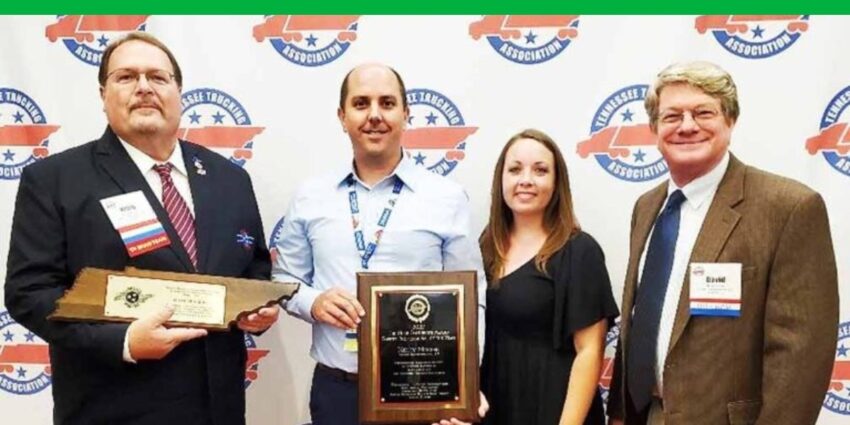 October 3, 2022 (Jackson, Tenn.) – Kelly Moore, senior vice president of safety and maintenance at Ascend, was named Safety Professional of the Year by the Tennessee Trucking Association (TTA). This award was presented to Moore during the association’s annual convention Sept. 20, 2022, in Destin, Florida.

Moore, who has been with Ascend for ten years, implemented numerous initiatives that have increased safety awareness and cost savings at the company, including a massive education outreach to the Ascend fleet.

“Drivers are very smart – if we have a safety slogan, without the culture to support it, they’ll call you out,” Moore said of his efforts to improve safety fleetwide. “When I talked to drivers, I realized we needed to help them understand why this was so important to us, why we were taking the time and making the investment – hundreds of thousands of dollars a year – in approaching safety. At the end of the day, it doesn’t matter how profitable we think we are as an organization; if we aren’t getting our employees home safely, we’re not a very successful company.”

Moore says he and his team put measurements in place to see where Ascend’s weak areas were regarding safety. Then, the company invested in programs to improve and strengthen awareness in those areas.

“Investing in that technology was huge,” he said. “Helping the team understand our heart, why we were doing this was also huge. Then, we put measurements in place so we could all hold ourselves accountable to making sure this was not only something we said but also something we would live by.”

After implementing its education initiative and seeing positive results, Moore and his team eventually distilled it into a program they called Win the Day, which narrowed the safety focus to smaller steps in three areas to be more manageable. The three areas of focus were to go each day without one work-related accident, without a single work-related injury, and no CSA violations.

In 2020, Ascend had one of its best safety years in a decade. As they kept driving the safety values in 2021 that Moore initiated, the company outpaced not only their target for the year but also beat the goals of 2020. Now, 2022 is on pace to be even safer, with lower scores and lower risk than 2021. Moore says this is evidence of a true culture change at Ascend, and over time the drivers have become the program’s leading advocates.

To qualify as TTA’s Safety Professional of the Year, nominees must excel in the field of fleet and commercial motor vehicle safety and be an active member of the TTA Safety Management Council for the previous year. Additionally, Moore was required to produce records verifying his success in advancing the highway and industrial safety of Ascend’s fleet.

Moore is currently serving as chairman of the West Tennessee Safety & Maintenance Council; he is a member of Commercial Vehicle Safety Alliance (CVSA) and serves on its Crash Data & Investigation Standards Committee and the Policy & Regulatory Affairs Committee.

Launched in 2022, Ascend is built on the foundations of over fifty years of service provided by firms brought together to form the company. Ascend operates a large asset-based fleet, an extensive brokerage business and a warehouse management division focusing on the needs of middle mile shippers. For more information on Ascend, visit ascend.net.